… to get Windows XP SP3, all the latest updates for IE7, Microsoft Office 2003 Pro, install AVG 8 Free Edition, WinPatrol,  set up maintenance task schedules, etc. on my friend’s computer. As though I needed a reminder of why I like Linux!

Posted by eyemeansit on November 19, 2008 in Uncategorized

Tagging Hundreds of Photos with KPhotoAlbum

I have been whittling away at tagging the huge stack of photos in my Pictures folder. Photos with “None” in the “Keywords” category are down to 9776 (from over 10500). This going to take a little longer than I thought!

Some KPhotoAlbum features I like:
-ability to find any tagged photo in a matter of seconds
-a very efficient tagging interface

One minor quirk I wish I knew how to fix:
-when I type in a new keyword that is a proper noun (capitalized), if it has the same initial letters as other key words in my database, it refuses to let me capitalize the new keyword unless I “left arrow” to retype the letter.

Some feature requests (which require a bit of explanation):

KPhotoAlbum already has the ability to sort the keyword/places/people lists.

Using this button will sort the keywords (or places or people) alphabetically, but will also allow you to drag and drop to make one keyword a subcategory of another keyword. This is very helpful for place names: 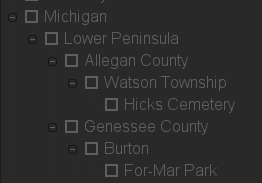 will sort the keywords according to which were most recently typed, which also is very handy.

A few suggestions (which I intend to add to the wish-list, once I figure out how to do so):

c) in my “places” supercategory, it would save a LOT of clicks and mouse wheel scrolling if selecting “Hicks Cemetery” (using the illustration above) automatically caused Watson Township, Allegan County, Lower Peninsula, Michigan, and USA to also be selected.

d) I’d like to figure out a way to use KPhotoAlbum’s slideshow as my KDE screensaver. Why? So that as the screensaver runs pictures from my folder I would be able to pause the slideshow, add tags or “tokens,” etc. (Maybe a few years down the road we’ll be able to use voice tagging… just speak the keywords, places, etc. Does that sound too lazy?)

I wish I was a programmer, and could offer code instead of just comments. Perhaps these things are already underway. I do know that Jesper Pedersen and crew are actively working toward the KDE 4 version. When new functionality begins to leave KPhotoAlbum 3.x.x behind, it may push me to take the plunge back into KDE 4. Until then, I’m enjoying a bit of productivity. We’ll see what KDE 4.2 brings in a few months.

Posted by eyemeansit on November 18, 2008 in Uncategorized

I have a couple of nights off from work, so tonight I am biting the bullet and starting the monumental task of tagging my digital image collection. As I explained in previous posts, I will be using KPhotoAlbum, which is very likely the most efficient tool for photo tagging in existence. However, it is still work!.

Now that I have the great majority of my images renamed by date and time taken, when I open KPhotoAlbum, (after allowing it to do its initial indexing, and after watching the introductory videos, of course!), it brings me to the “home” page: 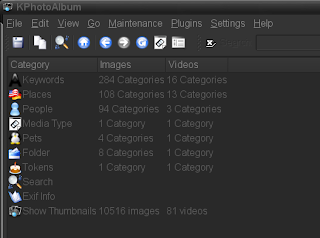 As you can see, there are several “super categories” listed on the left. Clicking on “Places” allows me to see all the sub categories. 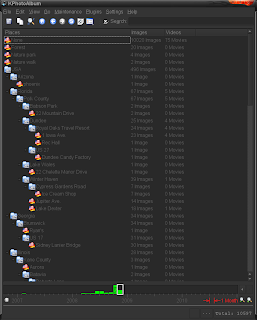 Clicking on a subcategory will select all pictures with that tag, and display how many are in the current selection in the “Show Thumbnails” line. 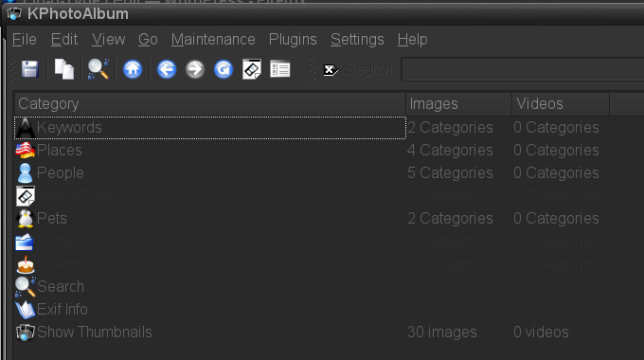 Clicking “Show Thumbnails” at any point will give you a display of all the pictures in your current selection.This is how you can quickly drill down to exactly the pictures you are looking for. 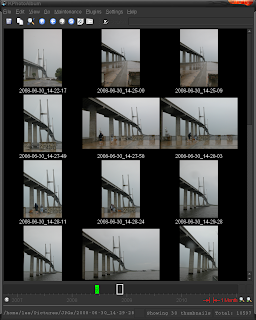 KPhotoAlbum is a great tool for KDE 3.5.x. Rumor has it that it is being overhauled for

KDE4. I look forward to seeing the new version.

Posted by eyemeansit on November 14, 2008 in Uncategorized

After a little tweaking, I came up with the following Jhead command, which named 99.5% of my picture files with the following format: FourDigitYear-TwoDigitMonth-TwoDigitDay_TwoDigitHour-TwoDigitMinute-TwoDigitSecond.jpg (e.g.: 2000-05-23_21-28-26.jpg, which translates to May 23, 2000, 9:28:26 pm)

I still have 28 files which had been manually renamed in ages past which jhead refuses to rename, complaining that “Possible new names for ‘filename’ already exist” I may have to rename those manually. We shall see.

On a side note, I had to separate out .bmp’s, .mov’s, .tif’s, etc. and will have to deal with them later. Jhead seems to work only with jpeg’s. Once I get the renaming and organization settled, it will be time to go to work on tagging with KPhotoAlbum.

Posted by eyemeansit on November 11, 2008 in Uncategorized

I just used Jhead to rename a majority of the 11000 pictures in my folder according to the exif date and time stamps. After installing Jhead from Synaptic, I issued the following commands in Konsole:

Wow. Stand back and enjoy the show as hundreds of pictures are automatically renamed, so they can now be sorted by the date and time they were actually taken. Nice!

Posted by eyemeansit on November 1, 2008 in Uncategorized